We examine how the biggest telcos in the US performed and how customers feel about them—in the middle of a global pandemic.

COVID-19 is driving a greater need for seamless, high speed connectivity, all the while, customer emotions are heightened.

In this report, we dive into 193,166 tweets from the last 30 days (21 April - 20 May 2020) to examine how the biggest telcos in the US performed and how customers feel about them—in the middle of a global pandemic.

With rising customer expectations, 5G, IOT and increased emphasis around sustainability, how do you know what to act on, and lead the way in trend-driven innovations to delight in action, not reaction?

We started by looking at the industry as a whole, to understand the universal issues that were most important to customers, and that were being talked about the most.

Overall, during the last 30 days, which just so happens to be in the middle of a global pandemic, this is what customers liked, disliked and asked the most questions about.

So what does it tell us?

The support for ‘frontline’ heroes was the winner for telcos which saw happy customers and consumers alike applaud their altruistic efforts.

Some of the favoured measures included:

Consistently, across all the top telcos, the game of who caused the most upset was a tag between customer service and bills.

Unresolved problems, the length of time it took to find a resolution, the amount of time spent on hold, the lack of call centre staff available - all played their part in riling up customers.

Did we mention this was in the midst of one of the most challenging periods of recent human history? Customer service was already an on-going issue for many companies - chuck a global virus into the mix and woosh—every pain point and existing problem is amplified.

Heightened emotions, anxiety (both staff and customers), staff shortages, closed shops and a genuine greater need for wifi due to the amount of people either working from home, home schooling or just trying to pass their day during lockdown, it’s a cocktail of stresses for everyone involved. The whole world even.

In April, Twitter reported a 23% increase in usage, reinforcing its position as the go-to resource for real-time information, helping people and businesses connect more easily.

How did the top four US telcos perform over the last 30 days?

Here’s a closer look at each provider in more detail, with an overview of challenges and/or successes, plus a list of the top terms used uniquely in reference to or about them.

Between them, AT&T, T-Mobile, Sprint and Verizon boast a user base of some 417 million subscribers1.

These huge customer numbers bring increased demands on services and support teams, both in terms of volume and complexity.

Failure to provide rapid, fair solutions, or prioritise existing customers over new ones provoke churn, with a direct effect on revenue.

So, how did the big brands fare on Twitter over the last 30 days, and how is their CX during COVID-19 impacting the overall sentiment for each brand?

Average sentiment score for each brand in on four key themes

This is based on a Wordnerds Sentiment Score: our own measure of customer positivity, measured out of 100, where 100 = everyone speaking positively about everything and 0 = universal outrage across the board.

In terms of overall score, therefore, the leaderboard is as follows:

Combining all themes, we then ranked each brand based on what “people liked” the most, showing who performed best in the eyes of the customer, and who had the keyboard smoking in rage.

Next, we took deep dive into each brand to explore these key areas in more detail and used the Wordnerds' software platform and analysed the text - surfacing the topics people are talking about and how they feel about them.

Click a brand to jump to the goods. Or keep on scrolling to take it all in.

From all of the data we analysed, these were the areas unique to the brand, and what was specifically mentioned most in their Twitter data:

Despite impressive PR campaigning around AT&T’s commitment to support customers during the Coronavirus and wave overage/late fees, the data revealed discourse on the true customer experience, with more than 350+ complaints from customers flagging late fees and additional charges still being applied.

In the last 30 days, we found AT&T customers were most likely to threaten leaving the service, than with any other provider.

Looking at the Customer Service experience of those using the DirecTV offering was found to be far worse than usual. The sentiment relating to the DirecTV CX dipped by six points to 43/100:

Here is how AT&T’s sentiment trend changed over time, with the black dotted line representing the average for all four brands across the 30 day period.

On the right, the volume trend shows the scale at which AT&T’s social media team were handling tweets compared to the other brands. We salute you team.

AT&T’s generosity and charitable donations were very well received, contributing to 10% of the overall conversation about AT&T in the last 30 days.

Despite the challenges there has been a general appreciation of service - keeping students and workers online and communicating during isolation has been praised.

Stuff to watch out for

Conspiracy theories - Whilst small in numbers, we are seeing some backlash around topics of discussion presented on news channels - namely CNN and OANN. Viewers are now calling on broadcasters to limit their platform to spread ‘conspiracy theories’.

Streaming - As demand for streaming services has rocketed during lockdown, HBO Max has certainly been on the watch list for many - a number of TV subscribers are unsure on whether their subscription includes HBO Max. Perhaps one for the FAQs?

Consistency - With the recent merger between Sprint and T-Mobile, the two telcos now have a job of marrying up the customer experience and service reliability for all customers.

T-Mobile Customers looking for an upgrade communicated an overwhelmingly poor experience (69% negative/15% very negative) with customers struggling with a raft of issues during the purchase process.

12% of users looking to upgrade via app/website could not finalise orders, due to errors and downtime. We recognised this issue was exacerbated with store closures.

Customers LOVE T-Mobile’s Unlimited Screen Protector Replacement support, but in the current climate of social distancing, there was frustration that staff couldn’t add the screen protectors for customers. It’s a fiddly job but not worth the risk for workers. Right?

Feel the churn - 24% of existing customers feel frustrated with deals available for new customers, as well as the length of time spent trying to find a solution or being kept on hold.

T-Mobile earned huge support from customers around their #GivingTuesdayNow campaign supporting frontline workers. It contributed to over 40% of the overall volume of tweets during our reporting period.

This campaign really moved the dial on the overall sentiment score - taking T-Mobile 6% above average with a score of 56. 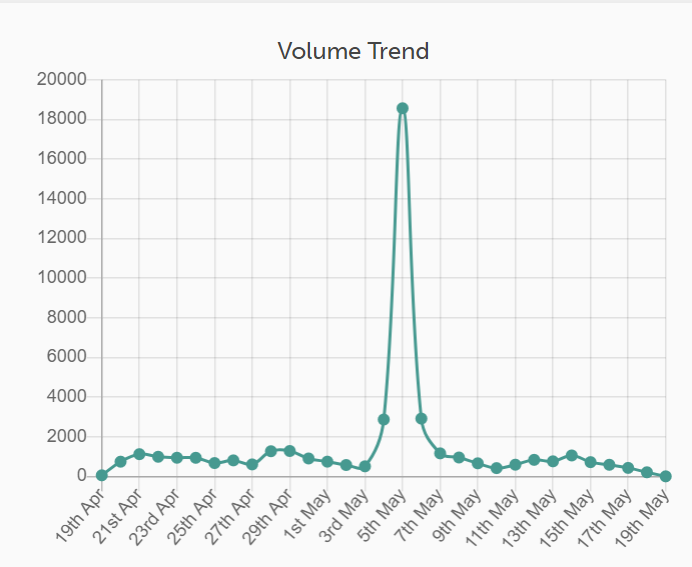 T-Mobile’s Mental health awareness #EndTheStigma campaign went down very well, with their onlines resources not shying away from the links between phone usage and mental health.

We found Sprint customers were twice as likely to complain about service than T-Mobile customers and three times more likely than Verizon.

According to our data set, we also found Sprint customers were flagging billing issues and payments more frequently than any other supplier.

Customers in Florida showed a particular dislike to Sprint’s door-to-door sales, feeling vulnerable in the current pandemic, and wary of potential scams.

Customers on Sprint’s Unlimited plans are particularly happy with the value and costs of their package deal. Especially as the demands for data have increased during lockdown.

Alongside the other providers, Sprint’s efforts to support front line workers and maintain connectivity as more people work from home was applauded.

Whilst service reliability, customer service and long wait times were still Verizon’s biggest customer issues in this period, we found customers with Verizon were up to three times less likely to flag customer service, wait times, and billing issues, than those with other providers.

Among the generosity and support offered to frontline workers, we found a particularly disgruntled group of customers - resident physicians - who were left feeling undervalued and under-appreciated, at being left out of the frontline worker discount.

Overall, customers were disappointed with Verizon’s ‘Up Rewards’ program, with 25% expressing negative sentiment:

During this challenging 30 day period, Verizon’s pragmatic support for business customers, essential workers and offer of free data for their customers has been hugely appreciated, and contributed to their strong overall brand sentiment score 51 - maintaining an above market average.

Verizon’s #humanability video promoting the benefits of 5G in the healthcare industry went down really well with viewers, as they recognised the importance of greater connectivity and low latency of the 5G service. This video was the most positively talked about content, in Verizon’s data set.

There you have it. 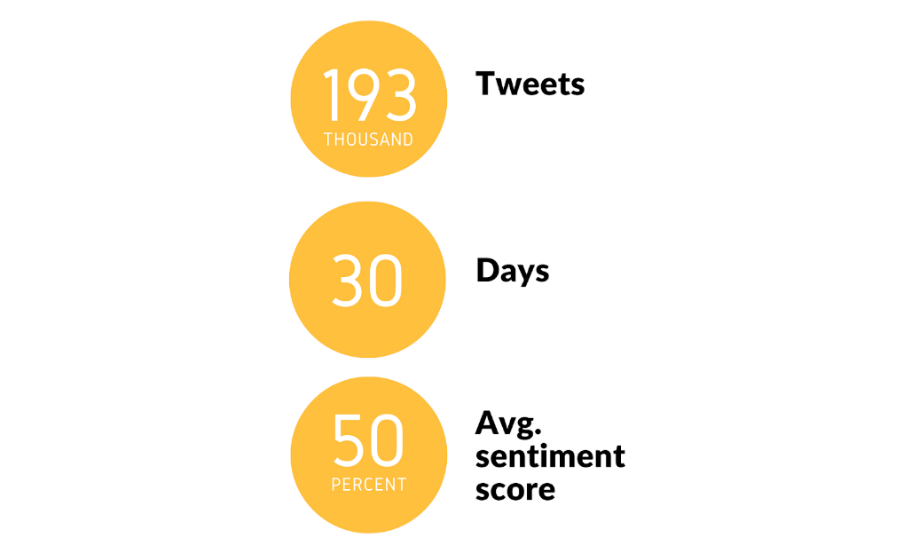 If you’re not acting on what your customers and potential customers are writing, speak to Wordnerds.

You can book a demo with one of our Big Data Consultant or have a nose around our Software page to see how it works.