In the late 90s and early 00s, Christmas didn’t officially begin in the UK until the premiere of Coca-Cola’s Holidays Are Coming ad. Pre-streaming households, when mobiles didn’t have such a dominant hold on our gaze, Christmas adverts were seen by the nation, invariably during a primetime TV break.

That was until 2008 when John Lewis entered the fray with their haunting covers, loveable protagonists and sentimental narratives that captured our hearts. Come 2011 we were hooked, with palpable anticipation for their annual festive offering.

Marketing Week recently crowned Aldi as the winner of Christmas 2019, citing the return of Kevin the Carrot as the most effective ad of this festive season. They asked 3000 consumers for their thoughts on this year’s crop of Christmas ads, measuring enjoyment, warmth and love created for the brand, and how attention-grabbing the ads were.

Using our Wordnerds platform, we wanted to see whether UK Twitter agreed, what they loved, hated and ‘meh’d’ about at this year’s Christmas adverts.

After processing over 17,000 tweets, we took a look at Twitter’s winners and losers, and a deeper dive into what people really thought and what the big brands can learn for next year.

If the winner was based on most talked about, John Lewis would win by an absolute mile. In fact, they generated significant volume before their advert even debuted in the anticipation of its release.

Volume aside, the sentiment around Twitter talking about Christmas ads in general also improved on the release of the John Lewis ad, featuring the “adorable” excitable Edgar. Early sentiment around the topic was dinted by the aversion at seeing ads so early in November. Here’s looking at you Iceland. 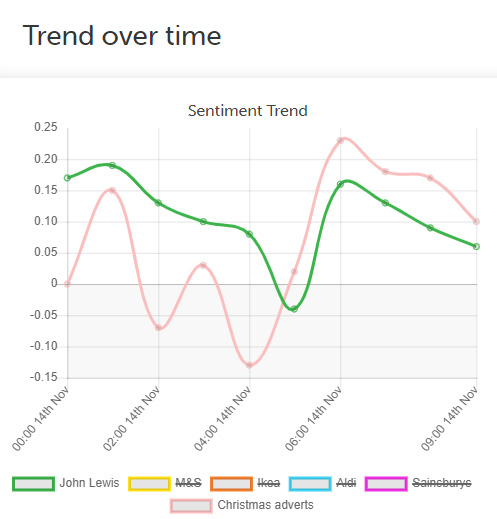 How did people feel about the John Lewis Christmas ad?

They loved it. They really did, with Edgar melting hearts, as well as the entire village, and the subtle nod to Game of Thrones’ mise en scène. Bastille’s Dan Smith’s rendition of REO Speedwagon’s Can’t Fight This Feeling wasn’t as well-received and the least popular element of the advert. However, sentiment analysis shows a trend in slipping favour for breathy covers across the board, with audiences looking for something different.

There was also some criticism around plagiarism claims for the ad content from Chris Riddell, pointing to similarities to Moz the monster, but not enough to impact overall sentiment. 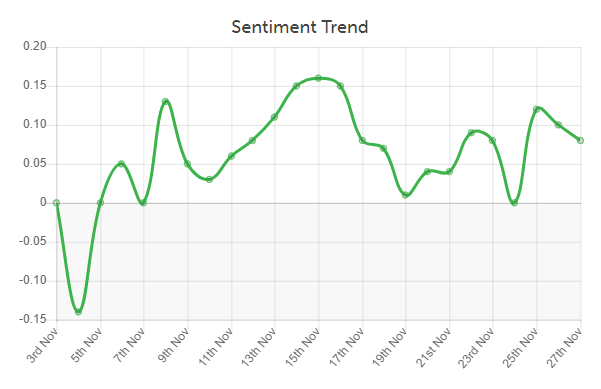 How other brands fared

As reflected in Marketing Week’s survey, Aldi’s sentiment score did remain the most consistently positive, with Kevin the Carrot winning favour. This, despite the not so popular decision of featuring Robbie Williams as the vocals for Kevin’s ‘The Greatest Showman’ style segment. 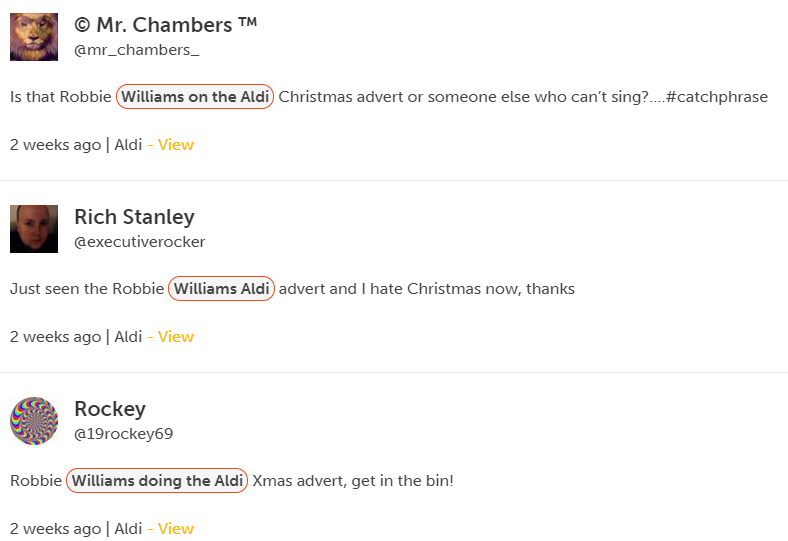 Dogs Trust enacted the most intense reactions, with genuine emotion being expressed on the narrative of the advert.

Iceland’s offering was received with a proportion of negativity, mainly due to timing. Turns out releasing your Christmas advert on Bonfire night is truly poking the bear. But no publicity is bad publicity, right? It certainly resulted in more people talking about their ad, which could have been at risk of falling under the radar. That said, timing it with the release of box office record-breaking Frozen 2 could yet prove a stroke of genius. £40 for a stuffed Snowman? SMH.

No-one saw the next ad coming and boy did it get people talking. The sheer repetition of Mariah’s crisp eating skills royally annoyed folk. But perhaps more than ever before, Walkers will be noticed in the crisp aisle this Christmas.

M&S really missed the mark this year with both their M&S Food and the clothing ads. They were deemed off-brand, cringy and Paddy McGuiness was a massive no-no for Twitter. 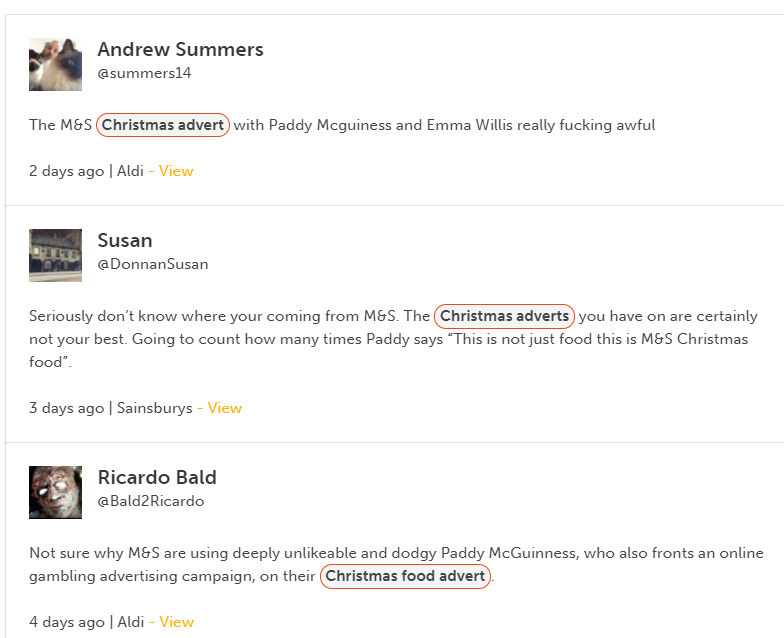 ASDA received mixed feelings this year. Some said they were trying too hard to emulate John Lewis’ style, while others praised them for capturing the true magic of Christmas.

What can brands learn for Christmas 2020

We salute all of the creative teams behind the Christmas ads. It’s a competitive business with a spotlight searching for perfection to please everyone. You all did tremendously well, and deserve to put your feet up, until January, when you can start planning next year’s campaign.