Wordnerds will be representing the North East on the world stage as we return to the World Rail Festival in Amsterdam.

Wordnerds will be representing the North East on the world stage as we return to the World Rail Festival in Amsterdam.

This December sees our return to the World Rail Festival - a world-leading event that attracts global public transport operators to Amsterdam.

CEO and Co-Founder Pete Daykin will be taking to the stage to explore the top applications of artificial intelligence for rail companies right now. With a specific focus on generating revenue, finding the true voice of the customer, and the anatomy of an incident.

With rail passenger satisfaction reportedly at the lowest level for a decade (transportfocus.org.uk), there has never been more pressure on rail companies to find ways to deliver better service, excellent customer experiences and focused improvements.

From monitoring reactions to fare increases and timetable changes to general feedback on train/station cleanliness; knowing what customers are saying and why can help rail companies identify key areas that are falling below service standards which matter most to their customers.

Since appearing at the event last year, where we won Start-up Innovator of the year, we’ve been galvanised by rail customer on-boarding, equity investment and team growth. As cheerleaders for the North East's tech scene, we’re immensely proud to be representing the region and the sector on a global platform and bringing real solutions to the rail arena. 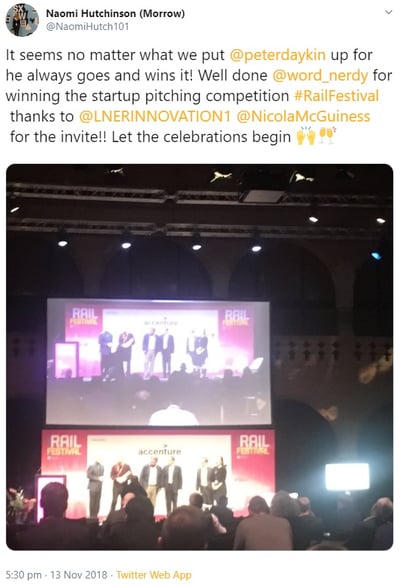 Joining Pete at the event, which is set to attract 800 – 1000 attendees across the two and a half days in December, will be Wordnerds’ Big Data Consultants Helen Precious and Luke Walker. If you're attending the event and would like to book a meeting with one of the team, contact us.

Find out more about how Wordnerds are helping rail customers act on what their staff, customers and potential customers are saying.