How Scottish Twitter changed online conversation - and what you need to do about it.

How Twitter has changed online conversation - and what you need to do about it.

Happy Burns night everybody! Today, in Scotland and across the world, we celebrate Scotland’s greatest literary mind by reading poetry to a bag of offal.

But Scotland’s cultural exports didn’t stop in the 18th Century. So today we decided to look at one of their most recent contributions to our language: the joyfully unhinged world of Scottish Twitter.

We’re going to get deep into what Scottish Twitter is, how it has changed the way we communicate online, and how it affects you if you’re trying to get actionable insight from social media.

But first, a Burns night quiz. These are words that appeared in tweets sent by Scottish people. We’ve tried these with actual, bonafide Scottish people, and out of context none of them got them all correct.

What do you think? Any ideas what they mean?  We’ll find out in the course of this article. But for now, let’s look at another weird quirk of the English Language.

How written and spoken language became the same thing.

Another quick quiz, this time for our friends outside the UK. How would you go about pronouncing these place names? 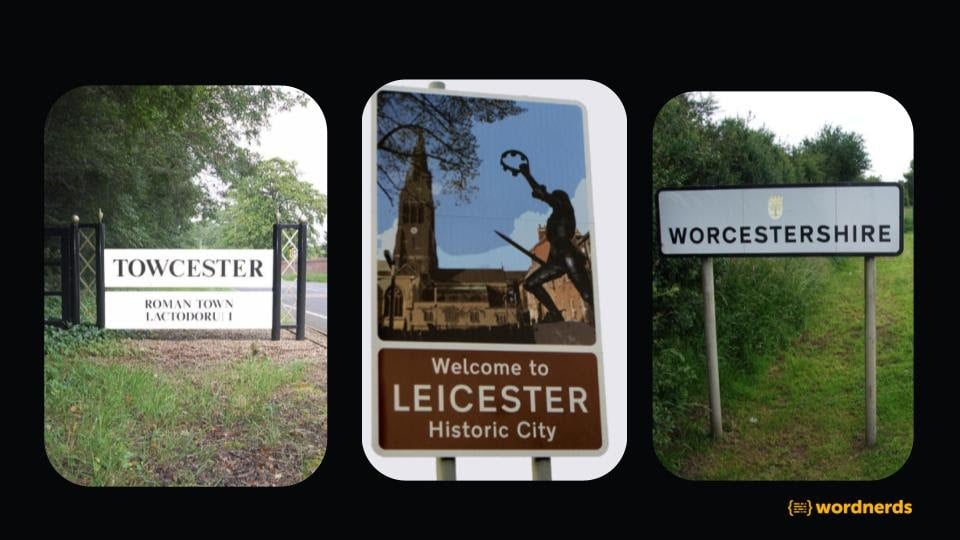 If you’re from the UK, you probably know that you’re looking at Toaster, Lesster and Woostersheer. But the big question is: why? Is it just people from the midlands being needlessly difficult? Why do these towns sound so different to how they look?

What really happened here was this: for hundreds of years, the spelling of these places were carefully written down in ledgers and atlases by literate people who didn’t live there. So the spelling didn’t change an iota. But in the same period, the people who lived there were in charge of how the words sounded, because they were the ones who were actually talking about the places. And, and spoken language always does, it evolved. Sounds were dropped or merged, vowels became looser, and eventually, the free-flowing spoken word became unrecognisable from its written equivalent.

What does this have to do with Scottish Twitter? Well, for centuries there was a barrier between written and spoken English. We’d write in one way, and we’d speak in another. But this barrier has been utterly obliterated by the internet.

Now, in every corner of the English speaking world, people are speaking how they write. And Scottish Twitter was one of the most exciting, fascinating, hilarious and peculiar examples of this phenomenon.

Canny - Scots but not

What did you get for canny? In Wordnerds’ stomping ground in the north east, canny is a word meaning lovely or friendly or geet lush like. But in Scotland, canny has a different meaning. 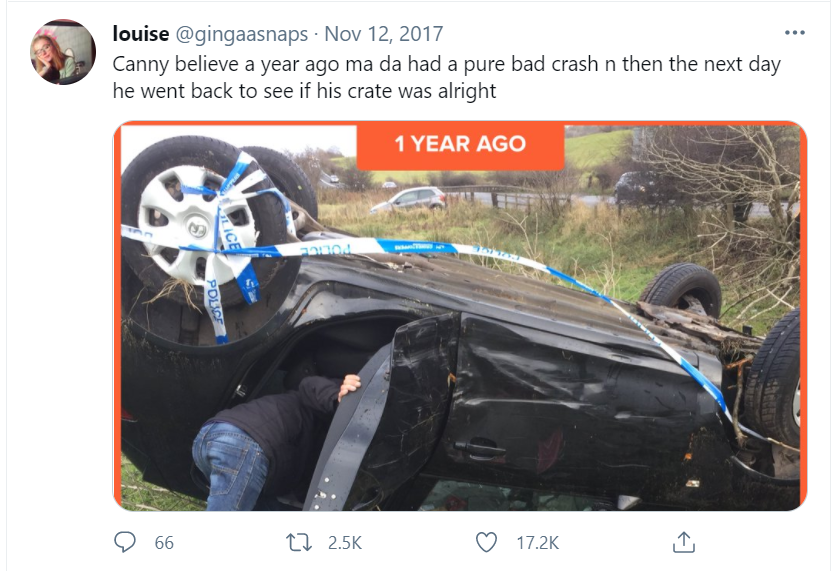 Canny in this sense has a history that goes back to Burns and beyond. It comes from the totally different language of Scots (This is an enormously contentious statement which I am nowhere near qualified to weigh in on. But it’s Burns Night, so we’ll let it slide).

Burns himself used the word canna (“Some hae meat and canna eat” and so forth). If you were writing in Scots, “canny” would almost certainly be auto-corrected to “cannae” (Scots for cannot).

But @gingaasnaps isn’t writing in Scots. She’s writing how she would talk. So we’re left with this melting pot of Scots and English, all spelt how it would be said. You can almost hear her voice as you read. And for me, this makes the tweet so much more powerful.

If you got geen right, I’m genuinely flabbergasted. This one is completely flipping impossible out of context, and may take you a few reads even when you’ve got the full picture. 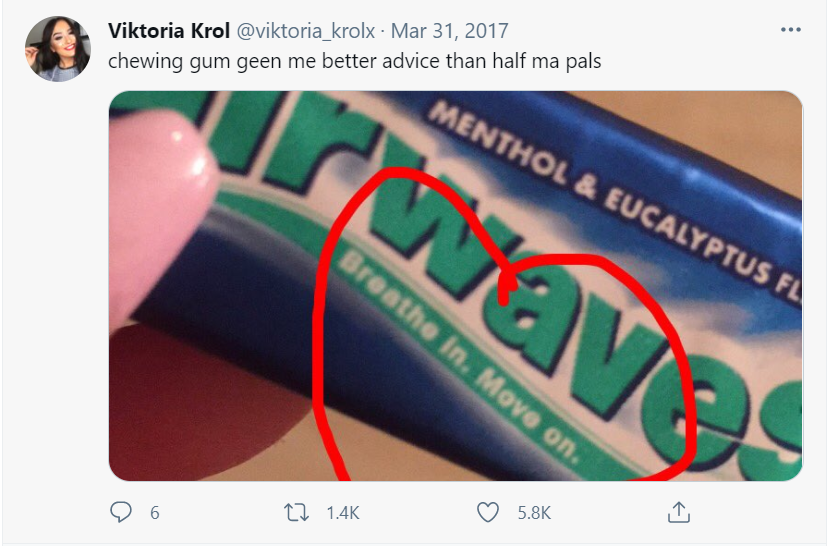 So, geen=giving. It’s a tricky word to write down in a Scottish accent - the word “give” would be written as “gie”, and Irvine Welsh, an amazing transcriber of how Scottish people talk, would usually write “giving” as “giein”. But that looks a bit weird. So in the same way that the sound of “Leicester” was simplified over the years, “giein” is written here as “geen”.

But there’s another interesting aspect of this tweet - it’s not, strictly speaking, a sentence. Written out in RP, you’d end up with something like “chewing gum giving me better advice than half my friends”.

Is this a peculiarly Scottish way of expressing yourself? Not even close. Here’s a couple of examples from last week of our American friends employing the exact same sentence structure. 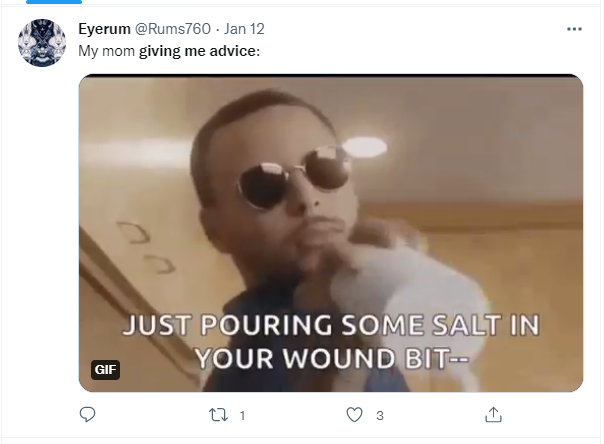 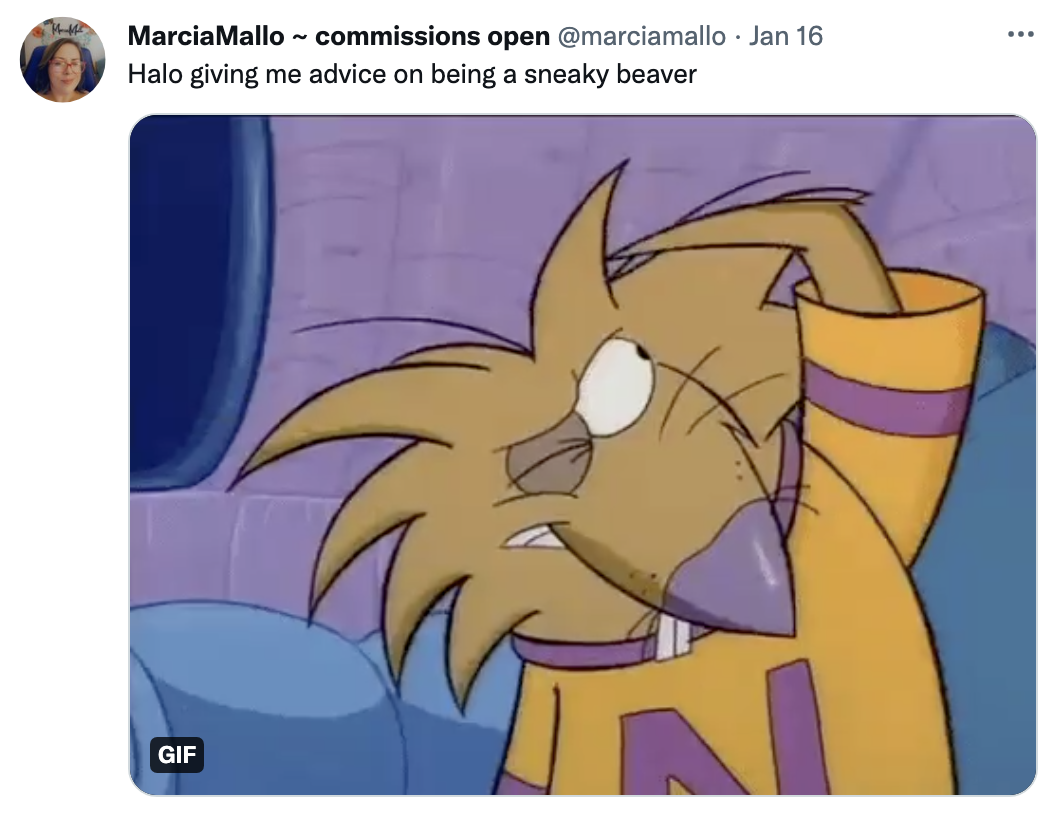 You’ve probably noticed one thing all these tweets have in common: they all have pictures attached. It’s a lovely way of presenting a joke setup, when the punchline is a picture, because this is exactly how captions for paintings, sculptures etc work. 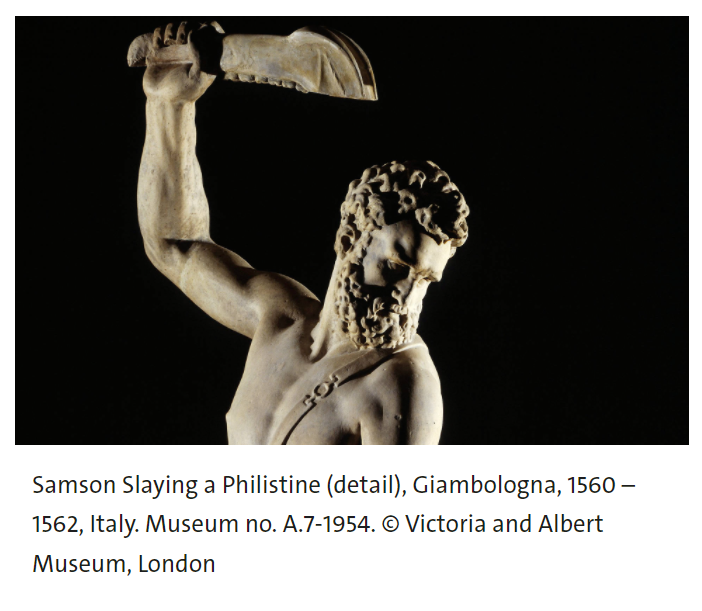 So @viktoria_krolx has taken a common format for an internet joke, and then put it through a Scottish ringer. And it gets even more complicated than that.

Sumdy - Bringing in rhythms of speech.

So we’ve seen an example of a standard internet joke being Scottified. But what makes Scottish Twitter such a phenomenon isn’t just about swapping vocabulary. It totally changed the language structures we see online.

To understand why, here’s a helpful video:

You might find this man difficult to understand, but that isn’t about the words he’s using. He takes one breath, and reels off four sentences, extremely quickly, with no real indication where one sentence ends and the next begins.

So when Scottish people, especially those from the Glasgow area, began to write online in the same way that they spoke, the sentences got longer, as we can see in this, arguably the funniest Scottish Twitter Tweet of all time. 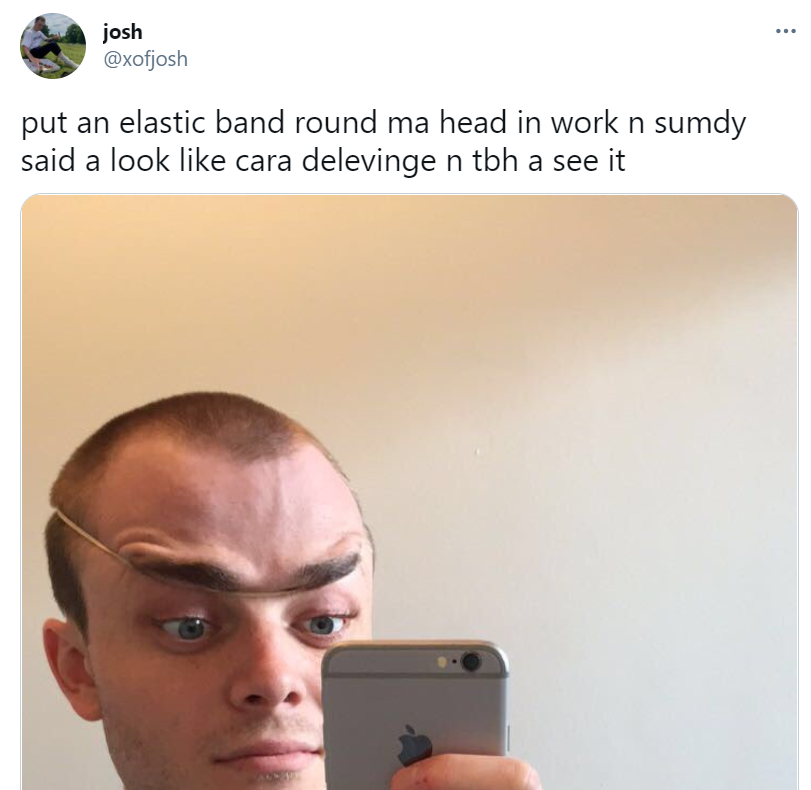 The total lack of punctuation, one idea just flowing into another, isn’t sloppy writing here. @xofjosh is adapting his written language to make it feel more like how he would say it. Again, you can almost hear his voice saying these words. 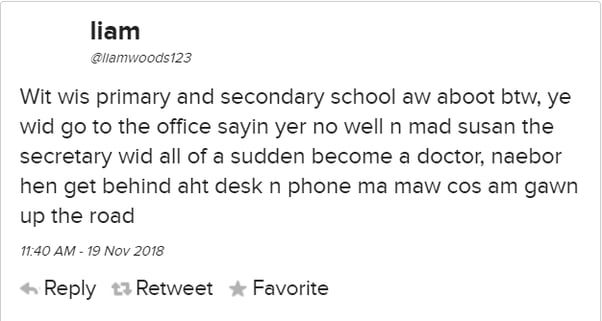 I’m obsessed with this Tweet. There’s so much going on in this ridiculous mashup of Scots, English and internet-speak.

You can see all the things we’ve talked about so far - the breathless rambling structure, the spellings entirely based on how a word sounds, not even respecting where words begin and end (“naebor” here would usually be “nae bother” in Scots or, “no problem” in English) - but it’s also taking things from internet culture.

“By the way” is a mainstay of how people speak in Glasgow. It’s used as punctuation, a verbal tic, the way you’d here “like” or “y’know” elsewhere. A Glaswegan friend of mine once said the following as a full, complete sentence: “By the way, by the way”

This verbal tic is used in this tweet, and I love that it’s been shortened to the standard internet abbreviation of “btw”. This emphasises the “Twitter” part of Scottish Twitter, but it also works as an approximation of how they speak - the “by the way” is usually a throwaway, not to be dwelt on,  so it makes sense that it’s as small as possible.

But what I really love about this Tweet, is that in its structure we can see the first shoots of the type of writing and humour that became a staple of online writing, not just in Scotland, but across the English Speaking world.

First of all, look at the rhythm of the Tweet. That breathless, stickle-brick structure of clause after clause with a twist right at the end? A huge amount of comedy Tweets use this structure now…

Then you have the wonderful specificity of “mad Susan”. This idea of starting with the general, did-you-ever-notice idea (the school office used to act like medical experts when you were poorly) which we probably all relate to, but with that detail that makes it both more specific, and oddly universal.

Our part-time medic at primary school probably wasn’t called Susan, but “mad Susan” feels like an archetype. We totally know the type, that the well-chosen name conjures up.

This is an idea that the internet has really adopted…

…And it hasn’t always been pretty. 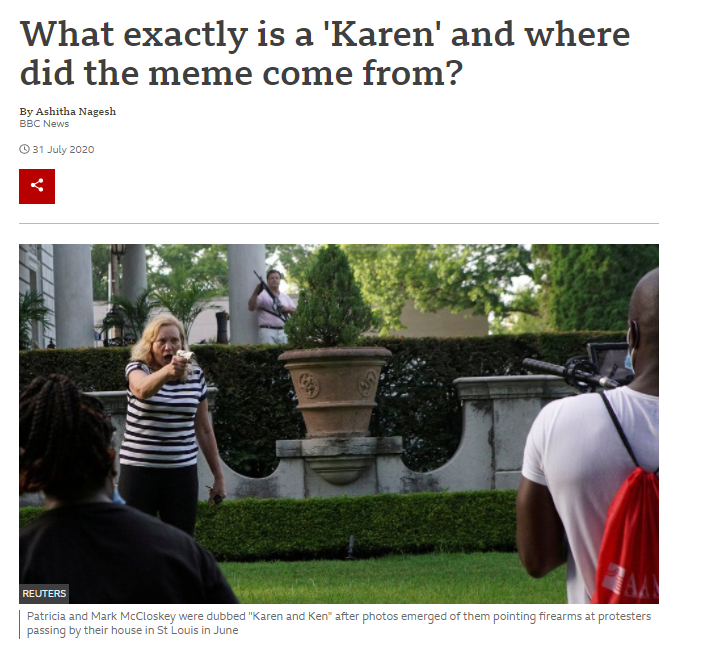 To be clear, I’m not saying that either of these writing techniques started out in Scotland. But it’s really interesting how we can hear these echoes across the internet, just from people writing as they speak.

To be clear: this is a problem

Scottish Twitter is an utterly wonderful development in our language. Absolute catnip for linguists. But if your job revolves around understanding opinions online, this presents you with a whole new world of problems.

And don’t think you’re out of the woods if you’re not in social.

This habit of writing how we speak, it’s becoming more prevalent all over. Surveys, emails, forums - wherever your customers are giving opinions, they are beginning to express themselves in these ways.

And this is going to mean that a lot of tried and tested methods are going to come up short. Statistical Analysis of the words used? When the same word is spelt dozens of different ways, you aren’t going to get far. Word clouds? Good luck with that.

So what do you do? Give up on trying to understand people? Go back to “select a,b, or c” quant data to find issues and opportunities?

There is hope. And it isn’t (just) from some exciting new technology. It goes back to the very foundations of the way we speak.

You see, all of the power, the emotion, the beauty, and above all the meaning of our language, comes not just from the words we use. It comes from the way that these words are interacting. These interactions are pretty consistent between English and Scots, and fall into beautiful, predictable patterns. 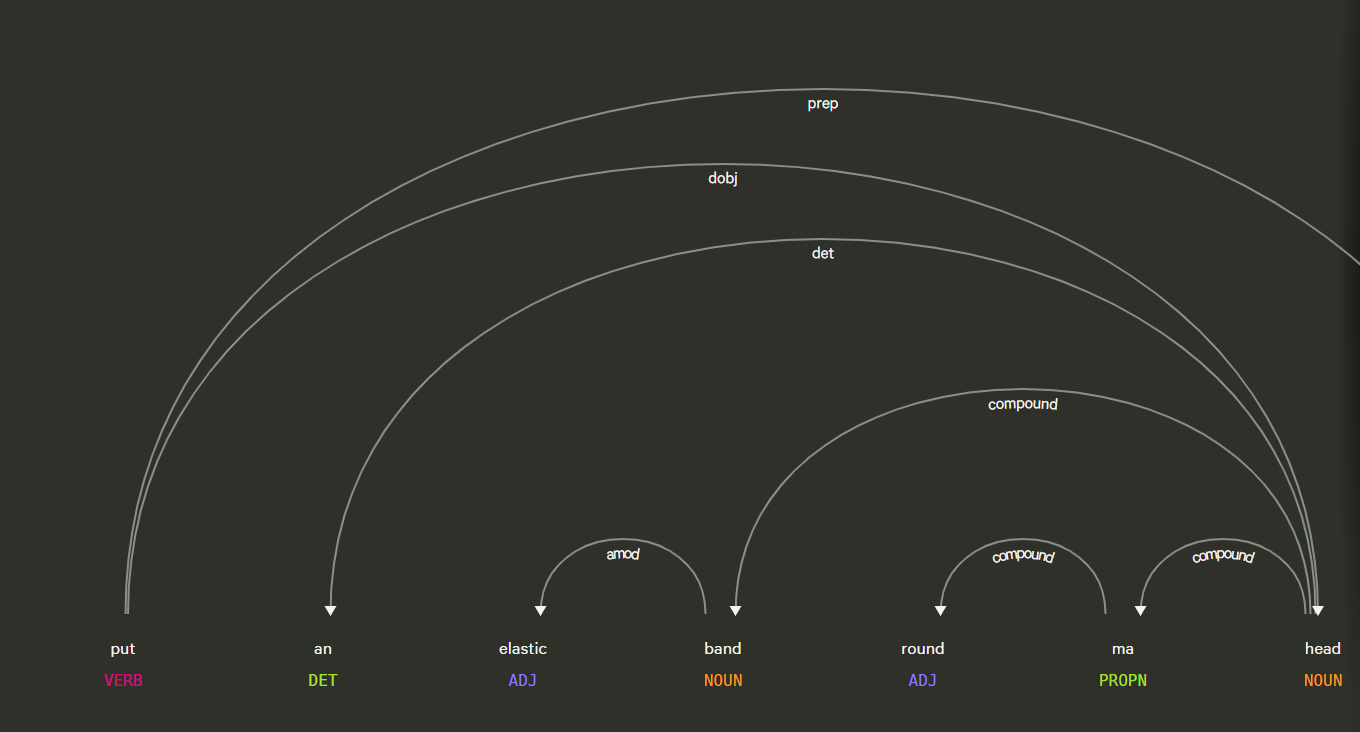 Using the context  - the job each word is doing in the sentence,  and how it interacts with the words around it - we can group text not by the words used, but by what the person means.

This allows us to be specific to a dataset (“sharp” is good for a knife, great for a suit, terrible for a kid’s toy), understand internet-speak from context (our platform can manage the “ds, “dd” and “lo” of Mumsnet), and let users speak however they want when they’re giving feedback.

So I’ll be raising a dram to celebrate Scottish Twitter, the amazing, exciting changes in our language caused by letting people write how they speak, and the technology that allows us to understand them.

You think that Scots was hard to understand? Try deciphering it on an empty stomach...