Ten things we learned from the Women’s World Cup.

As the dust settles on an amazing World Cup in France, Wordnerds has been knee-deep in Twitter data, picking out the key opinions, themes, and blinding rage that made up the World Cup on Social Media.

As the dust settles on an amazing World Cup in France, Wordnerds has been knee-deep in Twitter data, picking out the key opinions, themes, and blinding rage that made up the World Cup on Social Media.

We’ll always have Parris. Nikita Parris was the most popular England player - 92% of tweets about her were positive. Joining her on the podium were Best Player in the World™ Lucy Bronze (89%) and midfield dynamo Jill Scott (87%). But every one of the Lionesses had a positive review from Twitter.

Phil Neville took the blame. Despite a similar result and very similar dress sense, Phil Neville’s popularity was considerably lower than Gareth Southgate’s last summer, and dropped as the tournament went on. Neville took stick for tactical decisions, and for his comments about the third place playoff game. People were also unhappy about his stealing Southgate’s look.

There were five minutes in the whole tournament where people didn’t hate VAR. VAR was overall the least popular topic of the whole World Cup. The time it took, the new interpretation of handball, the flurry of penalties in the last ten minutes of games: people hated it. Except when Ellen White was awarded a penalty with minutes to go in the semi final. Then there was a spike in approval. How strange.

Megan Rapinoe divides the world in a beautiful way. If ever you wanted to see the divisions of our society writ large, check out the data on Twitter’s response to Megan Rapinoe. Everything Rapinoe did at the World cup, from saying that every team needs gay players, to refusing to go anywhere near the White House, to shouting “I deserve this!” while holding the trophy, was met with both joy and rage. We saw absolutely nothing like this in the Men’s World Cup. Love her or hate her (and we’re definitely in the love camp), a star was born.

Hope Solo is big in Scotland. Scotland’s star player in the tournament was Erin Cuthbert - 90% of the comments about Scotland’s playmaker was positive. But the most discussed subject in Scotland which didn’t make it to the rest of the UK was American commentator Hope Solo. Apparently the former US keeper a big fanbase north of the border.

Hey! VAR! Leave the keeper alone! Yes, we’re double dipping into the VAR controversy, but the sheer volume of comments berating it meant we had no choice. The least popular aspect of the VAR fiasco was the retaking of penalties where the keeper’s heels had strayed millimetres off the line. This retake rule did for Scotland in the last minute against Argentina, and was universally unpopular. To add insult to injury, the keeper was always booked, and the wasted time rarely accounted for. No more, please.

Cameroon didn’t win many friends. Cameroon we comfortably the least popular team at the World Cup, after their antics against England. Fans accused them of elbowing, spitting and refusing to play. Which is all standard Sunday league behaviour if you ask us.

That tea celebration was controversial. But not how you thought. 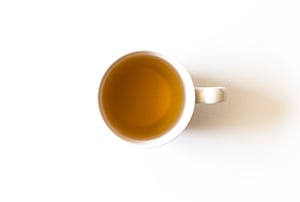 semi. But we found very little evidence of anger from England fans about this. The vast majority either found it funny, or didn’t see what the fuss was about. Where there were complaints about the celebration, they generally revolved around Morgan’s tea drinking technique (she’s going to spill all over herself apparently).

Equal pay isn’t going away. As the tournament progressed, and even after it finished, we have seen a steady increase in people discussing equal pay at the men’s and women’s world cup. While there was significant dispute about whether it’s a good idea, it’s a hot topic that isn’t going away just because the tournament is at an end.

It inspired people to go for a kickabout. One key theme that came through in the Women’s World Cup was the number of people who were taking a football to the park for the first time. This was true across the world, but particularly prevalent in England, which bodes well for future world cups. Provided they’ve sorted VAR out by then.

We are hugely proud of local lass Steph Houghton and her squad for their amazing spirit and tekkers at the World Cup.