A study of 32k tweets from 14 UK-based Housing Associations

A study of 32k tweets from 14 UK-based Housing Associations

Inflation, hikes in energy tariffs, global food shortages and the cost of living crisis seem to be screaming at us from every news outlet, a la Sirius Black on the front of the Daily Prophet (if you know, you know).

All these things are harder for tenants in social housing. But as the costs pinch, and when Housing Associations’ hands are often tied from a financial perspective, how do you help your tenants through this difficult time?

We used the Wordnerds text analytics platform to scrape over 30,000 tweets from this calendar year. These were aimed at 14 different Housing Associations with jurisdictions covering the length and breadth of the UK to get an in-depth handle on what residents actually care about - and what housing associations can do about it.

It probably won’t shock you to hear that what came out of the Viewpoint Rent and Service Charge Consultation Outcomes Report at the end of February was not popular with tenants.

Following announcements of rental increases by a minimum of 2.9% and a jump in services by at least 2% (effective from April), we noticed a spike in volume and a drop in sentiment as tenants voiced their frustration.

You could also see that trend regionally - the regions with the highest rate of conversation about service charges  (The South East, South West and North West) also had the lowest overall sentiment across all posts.

So far, so predictable. But there was a really interesting corollary to the reaction to the service charge increase: it led to an increase in other complaints. We saw a direct correlation between the increase in discussions on service charge, and complaints about other issues - including fire safety, hot water, repairs and hygiene. 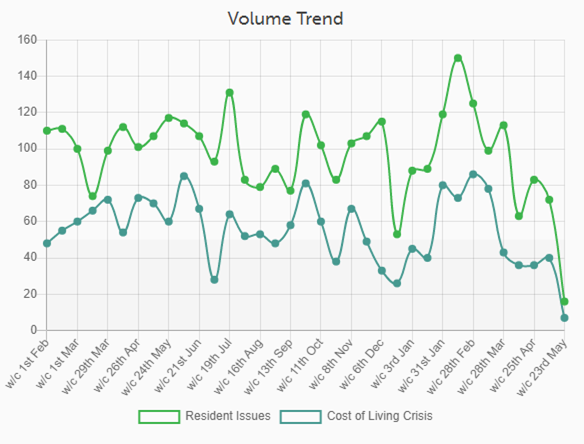 The data suggests an increase in expectation on a Housing Association when the charge goes up. Many users discussed this correlation directly.

This does represent an opportunity for Housing Associations, though. By preparing for this increase in general property issues, they can soften the complaints around the financial issues.

Communication is the only way out

This is obviously a difficult situation, with no easy ways to make it better. But there was one clear way to make it worse - not communicating changes with residents.

37% of all comments that were aimed Housing Associations were judged by the Wordnerds sentiment engine to be negative or very negative. But that number rockets to 72% when the resident didn’t feel that they had been communicated with on an issue.

Lack of communication received an overall sentiment score of just 32 - worse than any physical or financial issue for tenants. It was also the most likely bellweather for legal action to be mentioned.

This reinforces the need for better communication and support during periods of change for tenants - particularly in difficult moments. Transparency should be encouraged in advance of when prices increase to inform and justify the reasons why that’s the case. These efforts can help to alleviate and minimise tenant anxiety.

The Highest overall sentiment score was received by Southern Housing, mainly due to their investment in shared ownership properties.

Sure, Community initiatives are great but it’s not like they actually help with complaints about charges, right? Well, amazingly, we did see an inverse correlation between the amount of community outreach in a region, and complaints about service charges. There were outliers, especially in London, where there was an above average proportion of both service charge and community discussion. But overall, the more likely an association was to be seen to be working with the community, the less likely they were to receive complaints about cost of living. 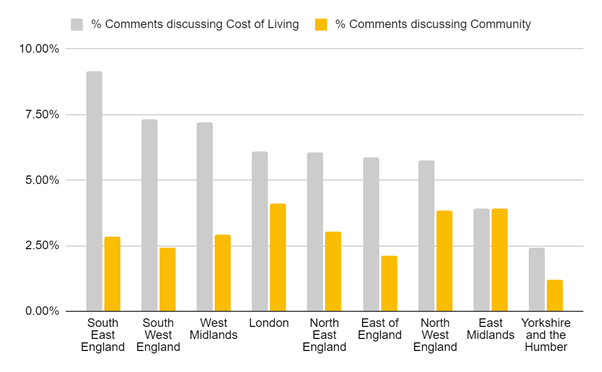 5 things a housing provider can do to reduce financial complaints

There’s no two ways about it - increases in charges will increase complaints. But we have seen several ways in which Housing Associations are reducing the complaints that they get, and improving tenants’ overall opinion of them.

These five steps can help you to make the most difficult times for your tenants a little easier, and make them happier than the Gryffindor common room after a quidditch win (I’m done now, I swear…)

Wordnerds already works with a number of Housing Associations in the UK, helping CX, Insights and Research teams to aggregate previously siloed feedback channels and derive actionable insights from qualitative data found in surveys, social, complaints, call centre transcripts and much, much more.

Drop an email to harry@wordnerds.ai and there’s plenty more Harry Potter references waiting for ya! ⚡