wordnerds at the world cup: ten things we learned

What a world cup! We’ve had more crazy twists and utter joy than a Kieran Trippier free kick. And across England’s adventure, Wordnerds has been following the hilarious, ecstatic, rage-filled and ultimately agonising journey of the fans back home.

Most social listening can’t really deal with football fans. They’re loud, sarcastic, and often drunk. But because Wordnerds looks at the structure of the language rather than just the vocabulary, we can make sense of Football Twitter.

We’re going to be delivering an e-book with the full rundown of our work in the tournament, but by way of a sneak preview, here’s ten things we learned following England around cyberspace. 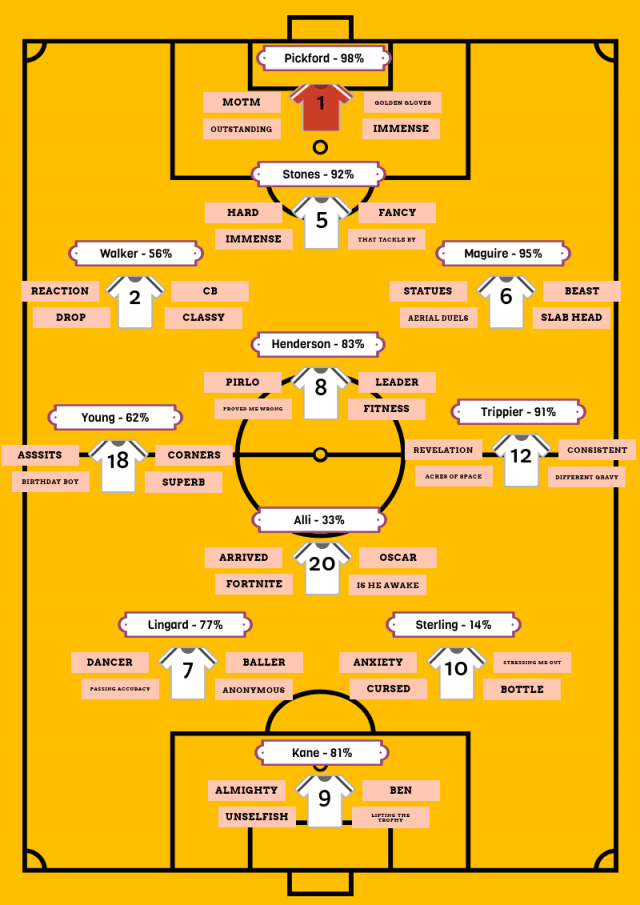 1. Best way to get a good review for your performance? Don’t play. Players who were in and out of the team were almost always more popular on the bench.
2. Snog Jesse Lingard, marry John Stones. Lingard was the England player that people were most likely to say they fancy, but more people said they wanted to marry John Stones.
3. Eric Dier’s Twitter nickname is “Bolical”. Other monikers we enjoyed included was Harry “Quagmire” Maguire and “Messe” Lingard.
4. Harry Maguire could deliver Brexit with his Slab Head. People are really keen to give him the chance. Best idea we’ve heard so far.
5. Keiran Trippier is different gravy. Trip has been a fan favourite throughout the tournament.
6. Ruben Loftus-Cheek is peng. The kids love a bit of RLC.
7. People weren’t sure about that waistcoat at first. Easy to forget now it’s a iconic moment in football fashion, but in the early rounds, opinion was very divided. Unfavourable comparisons were made to a supermarket manager.
8. A last minute winner feels better than thrashing them 6-1. During the walk in the park against Panama, just 59% of team mentions were positive, compared to 62% positive comments during the skin-of-the-teeth effort against Tunisia.
9. Gareth Southgate is a national hero, but he’ll never live down that Pizza Hut advert.
10. We’re proud of them. And we’ve watched the pride grow in real time. Thanks gentlemen. It’s been emotional.
Back to the Nerditiorium