Yeah, this article on sarcasm is going to be soooo interesting 🙄

The question I get asked most at tech functions, after “how tall are you?”, “What’s the weather like up there?” and “Do you play basketball?” is “How the hell can you teach a computer about sarcasm?”

I say, “Oh it’s really easy”. But I’m being sarcastic.

Sarcasm has a beautiful and special place in our culture, particularly in the UK where it basically constitutes a national pastime. But when your whole business model is giving the biggest brands accurate, unbiased feedback on their products and services from huge numbers of people, sarcasm is a monster of a challenge. So today, we thought we’d delve a little deeper into sarcasm, how it works, and how we try to deal with it for our customers.

So what actually is sarcasm?

Sarcasm takes on many forms, but as a bottom line, we think of it like this:

Sarcasm is a juxtaposition between what a person is saying, and what that person really thinks.

The impact, humour and general devastation of sarcasm are found in the gap between the two, and often, the subtler the gap, the better the sarcasm is.

Where the sarcasm is in the text

In product and service feedback, this is comfortably the most common type of sarcasm - where somebody states their problem, but surrounds it in sarcastic praise:

Thank you so much for delaying the plane for three hours, I love standing in overcrowded gates.

A human being can spot the sarcasm here from fifty paces, but text analysis tools? Not so much.

You can understand them finding it difficult - most sentiment engines are trained on stacks and stacks of sentences, and things like “thank you so much,” and “I love” are definitely used in thousands upon thousands of positive sentences.

But Sentiment+, the Wordnerds text analysis engine, is having none of it. 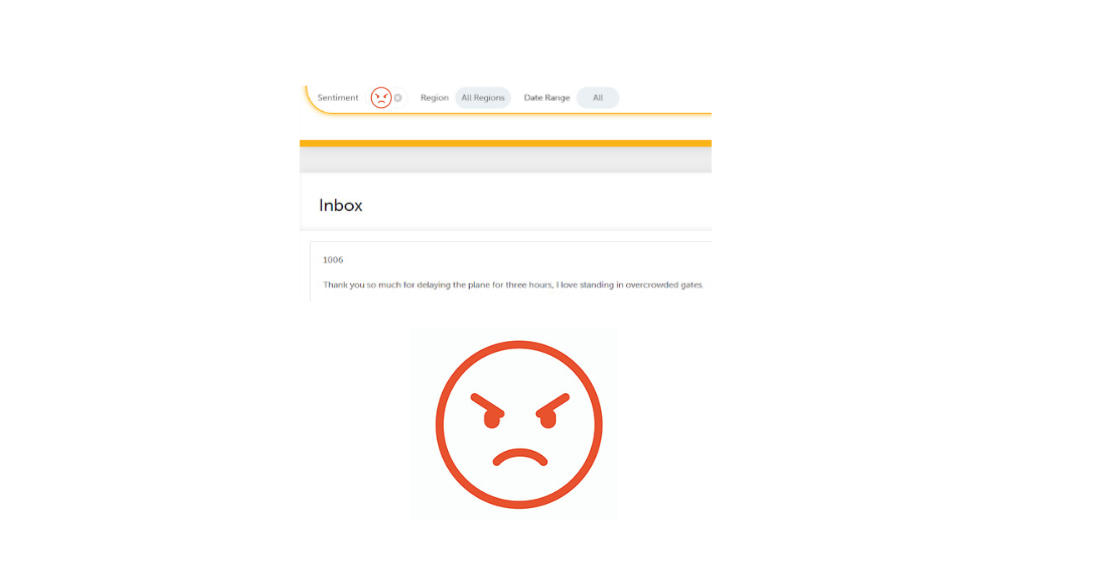 So how did we know this one was sarcastic? Because of the juxtaposition.

Wordnerds breaks the text down to its grammatical structure, so we find differences in sentiment easier to spot. And two different sentiments, pushing directly against each other without qualifiers? It’s likely to be sarcastic.

Where the sarcasm is in emojis

Obviously, in real life, your facial expression is one of the key tells that you’re being sarcastic. And online, we’re using emojis more and more to fill in for our faces.

What a brilliant article on sarcasm! 🙄

In our algorithms, emojis are having more and more of an impact on the text around it, and when we see an emoji that doesn’t match its surrounding sentiment, it’s often down to sarcasm.

But sarcasm gets a lot more subtle.

Where the sarcasm is in the person speaking

If you aren’t already following humour writer Cody Johnston on Twitter, get on that immediately. Go now. I’ll wait...

One of Cody’s running jokes is finding the dumbest right-wing commentators he can, selecting their dumbest opinion, and then cheering them on. 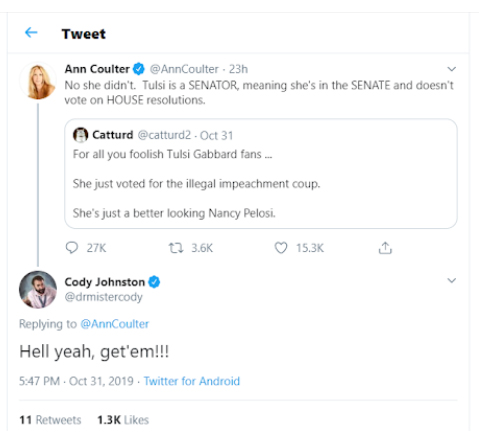 Note for UK readers - Tulsi Gabbard is not a senator.

There is absolutely nothing in the text itself that would distinguish this from an actual enthusiastic supporter. The juxtaposition here is entirely between who’s talking and what they’re saying.

So could a computer understand this kind of sarcasm? Maybe. It would involve getting a base level of somebody’s opinion from their published comments, and finding distinctions in the sentiment on similar concepts.

We’re very much about finding aggregated insight, not building profiles on individuals. Theoretically, though, with enough information about a person, an AI could spot when they’re being sarcastic.

But sarcasm gets even subtler than that…

Where the sarcasm is somewhere else entirely

If I may, I’d like to speak directly to my co-founder and our illustrious CEO, Pete Daykin:

Pete, what you said to me after the Dynamite Awards was wise and fascinating and changed my life forever.

Now, was I being sarcastic there? You may feel like you’d be able to guess, especially if you know us. But the only people who know for sure whether this is sarcastic or not are me and Pete. (And let’s face it: Pete can’t remember.)

And this is where sarcasm might just be beyond the reach of a computer. And you know what? I kind of like that.

Fun fact: In the 1580s an English printer name Henry Denham designed an irony mark which looked like this - ⸮. This backwards question mark of truth would make it easy to understand when someone was being sarcastic, every single time.

It did not catch on. Because Henry Denham did not have a strong grasp of the beauty of sarcasm.

The ambiguity is what we love about being sarcastic. It’s what makes it fun. The idea that some people wouldn’t get it, is what makes it funny. And our attempts to train to an AI to discern sarcasm, has only made us more in love with this silly and hilarious artform.

That said, nobody wants Marketing Teams to be cracking open the bubbly over sentiment data that has misfiled a whole stack of sarcasm. So if you’ve unleashed a round of blistering sarcasm on a brand, we’ll make sure that they know about it.

And for once, I’m being sincere about that.