COVID-19, altruism and the Tiger King

What Twitter sentiment reveals about how the UK is reacting during the Coronavirus pandemic.

What does Twitter sentiment reveal about how the UK is reacting to the Coronavirus pandemic?

COVID-19 isn’t something any of us have experienced before. It’s new, scary and unknown. Which makes being a human right now pretty damn hard.

As a result of self-isolation and social distancing, we’re predictably turning to social media more than ever.

As well as helping to disseminate news about COVID-19, and protecting users against misinformation, social media is helping us stay connected to our existing networks. It’s also a trusty sounding board for our fears, worries and FML moments.

Twitter recently reported a 23% increase in usage and has reinforced its position as the go-to resource for real-time information, helping people reach reliable updates from government and businesses.

With shops closed and limited call centre support, it’s also a place where consumers are flocking, reaching out to brands for queries, concerns, complaints and general comments.

Throughout the pandemic Wordnerds has been in the privileged position of helping a range of companies use Twitter data to inform and support key services. From finding problems quicker, to identifying trends where future issues may arise, tracking sentiment on specific service issues and highlighting resource gaps, Wordnerds’ text analysis software has been there to help.

For some light relief during a heavy time, we wanted to share some of our favourite standout themes. From vilifying companies to celebrating key workers and getting personal about life during self-isolation, as always, Twitter users have come into their own:

Rise of the Guardians

COVID-19 has brought fear, stress, job losses, panic buying and a myriad anxieties. However, it has also surfaced an unprecedented sense of community during these testing times.

This has been embodied in varying displays of respect for front-line workers with calls for applause, equipment and recognition. 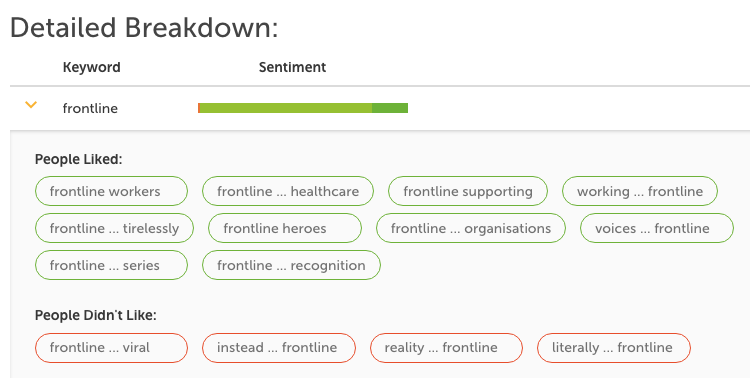 As restrictions were heightened and only key services were allowed to remain operational, a new breed of hero emerged. Dressed in an array of uniforms—delivery drivers, transport, warehouse, retail, call centre and utility workers, carers, cleaners and security staff—some of the worst paid and most insecure jobs in the British economy have been hailed as the heroes of COVID-19.

At the turn of 2020, did you ever imagine you’d be standing on your doorstep with the rest of the nation, applauding the Aldi checkout worker, whose hurling of goods at you is now admired, not a cause of panic? It’s OK. They didn’t either. But that was then, and this is now.

COVID-19 has flipped society on its head, exposing an uncomfortable truth: the people we need the most are often the ones we value the least. And they’re the ones risking their health to keep the country up and running.

Cleaners in particular are emerging as a group of key workers being singled out for appreciation. Outside of NHS and care workers, this undervalued profession accounts for almost 50% of key workers that Twitter are singling out to thank. 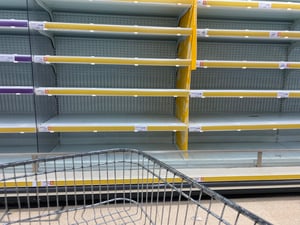 The Guardian’s Bee Wilson touched on the contagious panicky behaviour:

"Every time we read an article telling us not to be selfish and ransack the supermarkets, it triggers the thought that food is running out and we must urgently get to the nearest Tesco and buy five packets of pasta and as many tinned tomatoes and lentils as we can carry."

Volume trends showed how quickly panic buying took off, but thanks to swift action from the supermarkets, the severity of the problem peaked mid-March and has waned ever since.

However, recent suggestions of lifting buying restrictions has seen a return of worry around panic buying, with some consumers taking to Twitter to urge retailers to keep the limits in place. 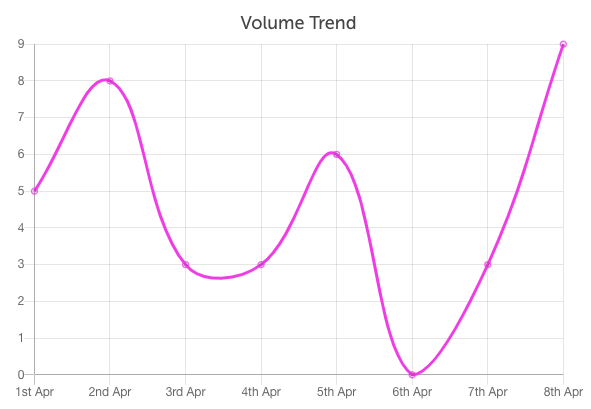 One unexpected star of the supermarket's pasta shortages was Ann Summers, whose penis shaped pasta sales grew exponentially, bringing light relief to a mood on a short fus-illi 😬

David J. Court. We salute you. 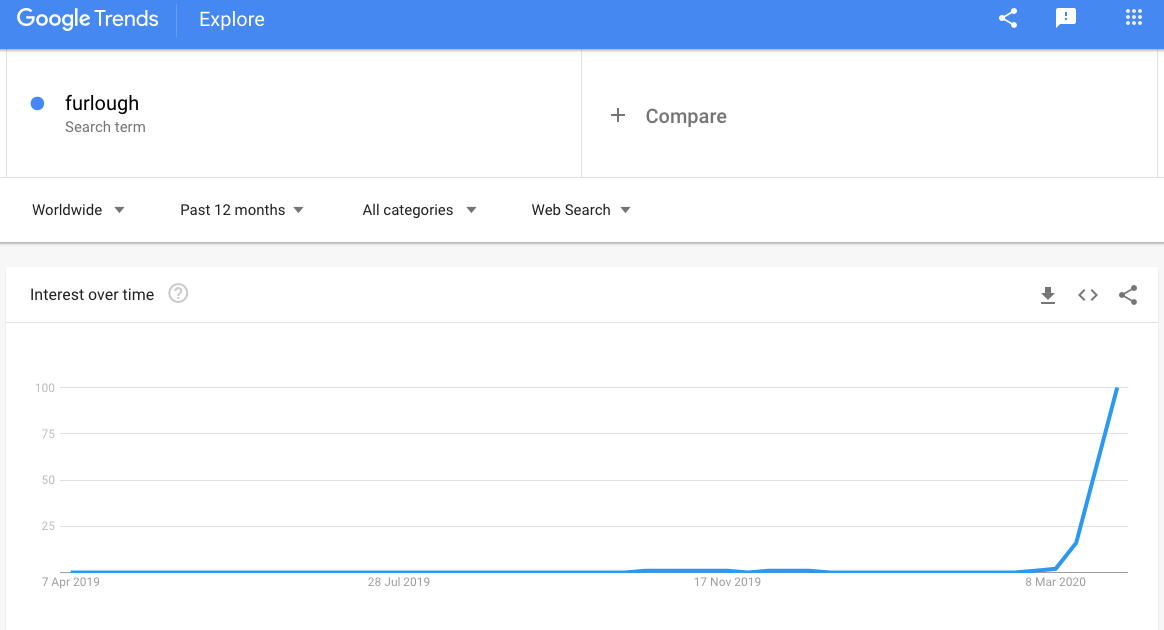 A new word entered our vocabulary in March 2020. Furlough - the temporary laying off of employees, while the government pays 80% of salaries for three months. And boy, is it now a staple of our Covid-induced existence.

There was one particular industry where furloughing did rile Twitter though. We saw a trend emerging with football clubs coming under fire following the news that they were to furlough non-playing staff, despite keeping footballers on the books and having a canny penny in the bank. 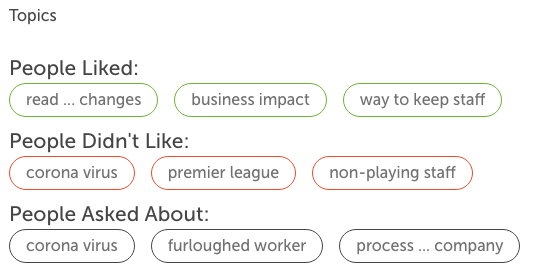 Whether it was furloughing non-playing staff, or football clubs using government money to pay staff - the opportunistic cost cutting spurred backlash. As a result, Liverpool u-turned on their decision, closely followed by Spurs and Newcastle United.

And as we all now know, players from the Premier League launched the #PlayersTogether campaign to help the National Health Service with its COVID-19 treatment and relief efforts.

Hey all you self-isolating cool cats and kittens

While people were obviously worried about the implications of the virus and being furloughed - keeping boredom at bay has also been a hot topic on Twitter. The lock-down ended public gatherings, gigs, eating out, cinema trips, days at the beach and confined us to our homes.

Netflix and chill was now a life-saving mantra.

With people flocking to the chief boredom exterminator - sentiment around the streaming service has fluctuated in the last 30 days.

Just after loo roll started to appear on shelves again, Netflix announced that they’d be cutting streaming quality in Europe for 30 days to ease strain on internet service providers. Philanthropic, right? Well, it wasn’t received that way, and users stropped that their life-line to survive self-isolation was reducing bitrate. The outrage.

Perhaps it was the prospect of not seeing Joe Exotic in his full glory that upset people most.

Subscribers also opposed Netflix’s decision to drop Outbreak. The 1995 doomsday movie about a deadly virus rocketed to the top ten most-popular titles in March but was deemed too ill-timed for some viewers.

Also topping the charts was the charts themselves. Netflix's new top 10 streaming list, tapped into the growing ‘in this together’ ideology, as we all basked in each other’s love of The Tiger King, with the rambunctious antics of Joe Exotic, his motley crew and that damn Carole Baskin. 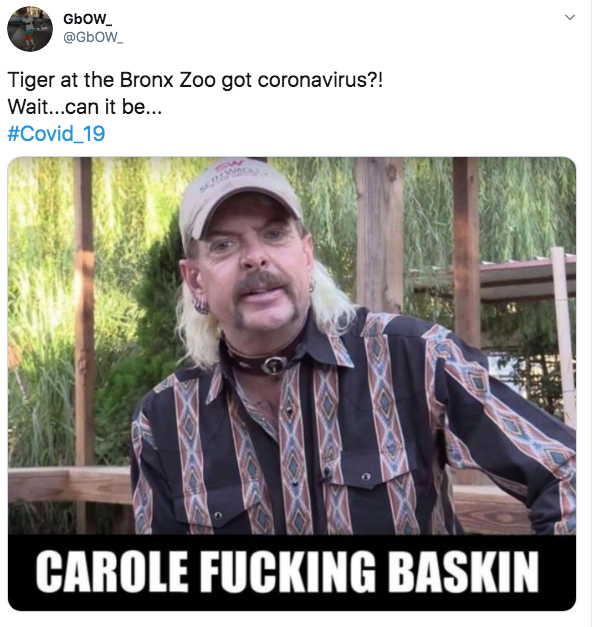 Carole was even blamed for the Houseparty hack. She really will stop at nothing. 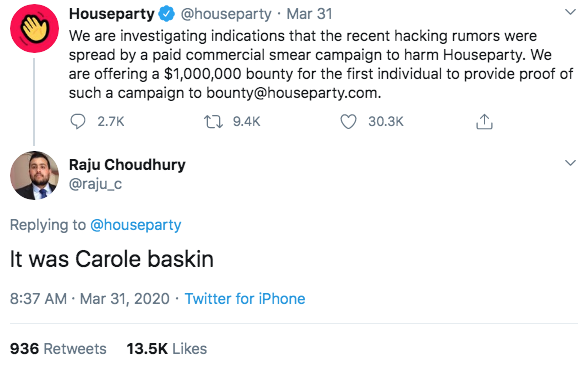 Carole Baskin aside, Netflix’s documentary library is receiving kudos, especially ‘Pandemic: How to prevent an Outbreak’, which became one of the most-searched for TV shows. This has only added to the increasing anticipation of Netflix’s Coronavirus documentary. Let’s hope the wheels are already in motion on that one.

Be it trimming, maintaining, or colouring, with salons and barbers closed those reliant on frequent trips for a chop are facing a hairy problem.

To grow or not to grow.

We can all agree though, in the grand scheme of things, it’s a nice problem to have.

Tweets mentioning Coronavirus or COVID-19 show trends in growing positive sentiment, as we look to other topics to focus on. Like celebrating the amazing work of our key workers, keeping in touch with loved ones or lifting our own and each other's mental health.

As this pandemic unfolds, let’s hope some sort of normality returns soon and we move on with our newly discovered sense of community and appreciation for what really matters.