Welcome to bias week at Wordnerds. Any data scientist worth their “Kiss Me I’m a Data Scientist” novelty baseball cap knows that bias is an enormous challenge, in Big data, Artificial Intelligence, and beyond.

Welcome to our first bias week at Wordnerds. Any data scientist worth their “Kiss Me I’m a Data Scientist” novelty baseball cap knows that bias is an enormous challenge in big data, Artificial Intelligence, and beyond.

Wow, that last sentence requires some unpacking. It’s making three colossal assumptions, which we really need to talk about in turn. Those assumptions are:

In the coming weeks we’re publishing three articles taking each of these challenges in turn. And where better to start on our quest to understand bias than the gloriously resurgent, but occasionally maligned bastion of Britishness, Strictly Come Dancing?

How could we judge whether there is Strictly bias?

The tricky thing about trying to establish whether there’s bias in Strictly is deciding whether someone leaving the show is fair or not. Most of the articles that talk about Strictly bias focus on either which contestants leave strictly, or which contestants win.

But how do you judge whether somebody deserved their Strictly fate? Maybe they were just the worst, or the best, dancer?

As a dancer with all the grace and panache of an elephant trapped in a toilet cubicle, I’ve only got one way of understanding how good a dancer is: the scores they were given by the Strictly judges.

So we compared the scores given by the judges, to the votes given by the audience. Now the votes aren’t revealed by the BBC, so all we have to go on is who ended up in the bottom two. So, we’ve based how celebrities were treated by the Strictly audience on the number of times they were:

We’ve counted up the times each couple was saved or dropped. If you’re saved, you get a point, if you’re dropped, you lose a point.  If you’re joint second bottom with another dancer, that counts as half a save or half a drop.

Got that? Good. This is our way of trying to establish bias in Strictly.  Now let’s talk about all the problems with it.

Limitations of this way of doing things:

But with those caveats firmly in mind, let’s take a look at who gets saved by the Great British Public, and who they’re happy to drop.

Most saved Celebrities in strictly history 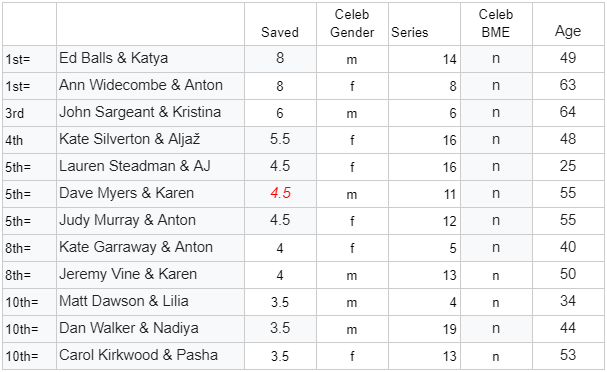 Most saved celebrities. “Age” is celebrity age at the start of their series

It gets political at the top of the table, with professional politicians and decidedly amateur dancers Ed Balls and Ann Widecombe being saved eight times in their respective series. Last year’s loveable bandwagon Dan Walker barely scrapes into the all-time top 10.

Most Dropped Celebrities in Strictly History

Most dropped celebrities. “Age” is celebrity age at the start of their series 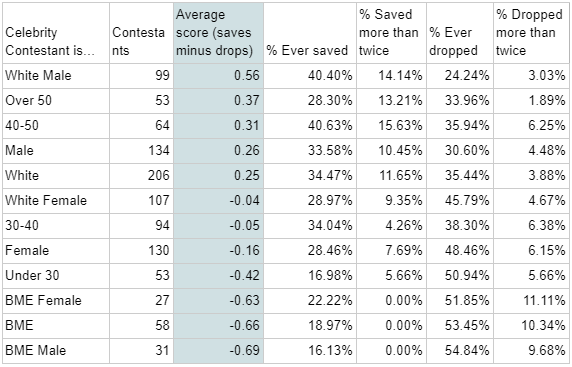 We then compared all the different demographic groups we’ve discussed so far, also combining race and gender, to get a sense of the demographic qualities that the audience seemed to get behind. Based on what you’ve read so far, you’re not going to be shocked by what comes next:

So what does this mean? That Strictly is entirely watched by bigots? Obviously not, and that’s the point. Even if there is a very, very slight subconscious bias in a system, if you run that system over and over again (say, through millions of strictly votes), the bias can end up making massive, material differences.

Which brings us to AI. Natural language processing is built upon, is trained by throwing millions upon millions of sentences through a neural network. Those sentences were written by people. Next time, we’ll look at how the bias in society can create bias in AI.